Responding to a Pesticide Exposure*

If you or someone else is exposed to a pesticide, you can reduce the risk of poisoning or injury if you

quickly recognize that an exposure may have occurred and properly tend to the victim. This requires that you become familiar with symptoms of exposure to pesticides you handle and with the proper procedures to help whoever was exposed. As usual, the pesticide label is a vital resource for you.

Information on the Pesticide Label

A "First Aid" or "Statement of Practical Treatment" section on a pesticide label provides instructions in case of poisoning or accidental exposure. Contained in these instructions for some pesticides, including all products bearing the signal word "Danger" or "Danger - Poison," is a note to physicians describing appropriate medical procedures and antidotes for poisoning emergencies. 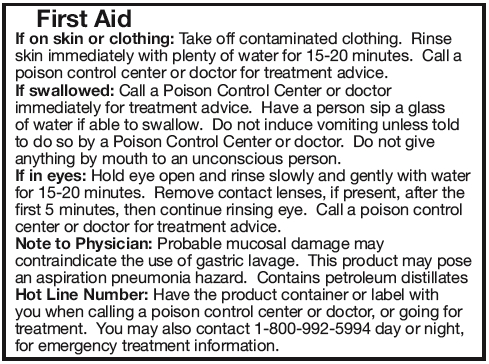 Sample label directions for response to a pesticide exposure

Read the "First Aid" or "Statement of Practical Treatment" section before you use a pesticide so you can react quickly to an exposure. Acting fast will reduce exposure and lower the risk. If you wait until after an exposure occurs to read the label, you will lose valuable time and will increase the risk of harm to the victim. And if you are the victim, you may not even be able to read the label.

Become familiar with symptoms of exposure to the pesticides you handle so you know what to watch for. The National Pesticide Information Center (800-858-7378 or npic.orst.edu) is a good source of information on symptoms of pesticide exposure.

Pesticides with a common mode of action tend to induce a common set of symptoms in exposure victims. For example, organophosphate and carbamate insecticides are both cholinesterase inhibitors and cause similar symptoms of exposure.

Know When To Act

You can see from the list of symptoms of mild organophosphate or carbamate poisoning in the above table that it's not always easy to tell whether a person has been poisoned or is just plain sick. Symptoms of pesticide poisoning often mimic symptoms of other ailments including colds, the flu, or even a hangover. If you get a headache or begin to feel nauseated at work, you won't know right away whether or not you are just coming down with something.

Play it safe. Always assume that any symptoms that arise while or soon after working with a pesticide are due to the pesticide. If you or any of your fellow workers feel sick or unusually tired or notice a skin rash or irritated eyes, do not try to finish the job. Leave the treated area and seek help immediately. Responding quickly is vital to preventing or minimizing poisoning.

Obviously, there will be times you want to act even before symptoms develop. Examples include splashing yourself with pesticide or getting any pesticide in your eyes. If you know or suspect that exposure has occurred, immediately separate the victim from the source of exposure, apply appropriate first aid, and seek medical attention (if warranted).

Even as you are applying first aid, seek medical attention whenever someone:

Call for medical help as soon as possible. If you are alone with the victim, you may have to get the person out of the exposure situation and begin first aid before you can call for help. If you are the victim and no one is around to help you, don't panic; follow the same guidelines as you would if someone else had been exposed.

Keep phone numbers for each of the following with you, such as in the contacts list on your cell phone or in your work vehicle:

When you call any of these resources listed above, have a copy of the pesticide label with you, provide as much detail as you can about the exposure (e.g., duration, diluent and adjuvants used, weather conditions), and describe the victim's condition. If you are calling a doctor, also provide any emergency contact numbers and/or notes to physicians that may be on the pesticide label.

Going to the Doctor

Have someone take the victim to the doctor; someone who needs medical attention should go alone only if no one is near to help them. Be sure to bring a copy of the pesticide label so the medical personnel know what they are dealing with and can check the label for helpful information. 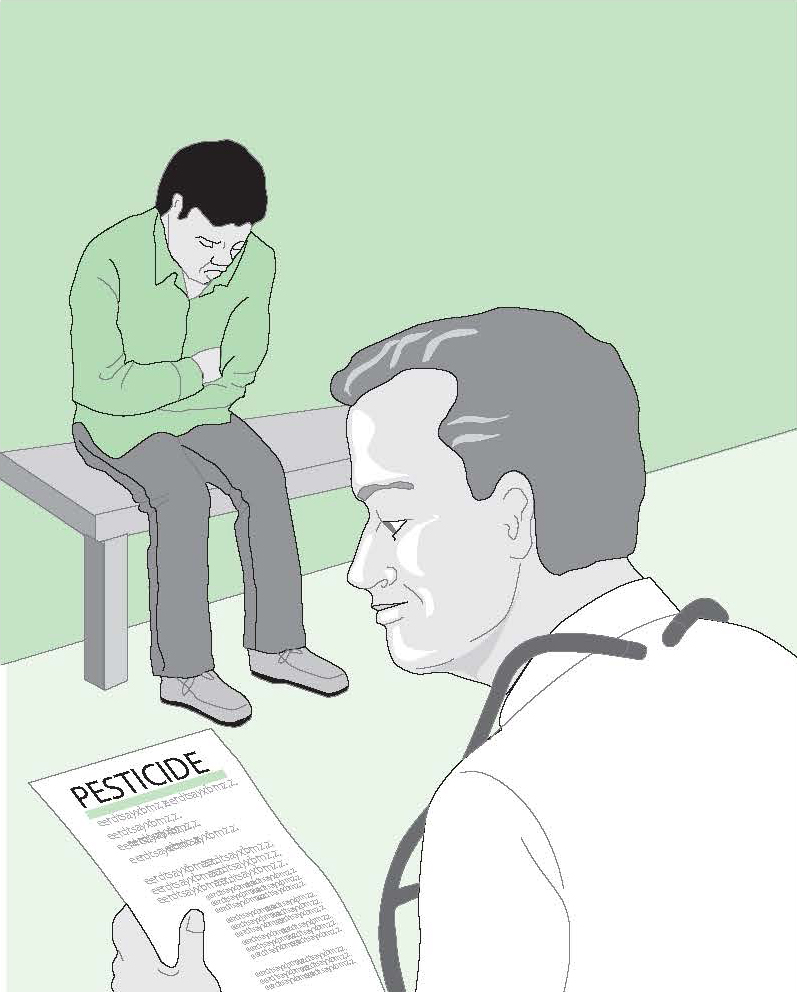 Always bring a copy of the pesticide label when seeking medical advice for exposure symptoms.

First aid is the initial effort to help a victim before you can get them to medical personnel. It is not a substitute for medical attention, but can be critical in avoiding serious poisoning or injury. Become familiar with label statements regarding first aid and the procedures we'll discuss here before you use a pesticide; you likely won't have the time or opportunity to look up the information if there is an emergency.

Regardless of the route or extent of exposure:

If pesticide gets on a person's skin:

If pesticide gets in a person's eyes:

If someone is suffering from an inhalation exposure:

If pesticide has gotten in the mouth but has not been swallowed, rinse the mouth out with plenty of water. After rinsing, have the victim drink at least 1 quart of water or milk to dilute small amounts of pesticide that may have been swallowed during rinsing.

If pesticide has been swallowed, one of the most crucial decisions to make is whether to induce vomiting. The decision must be made quickly and only by a medical professional because the victim's life could depend on it. Call a medical facility or the Poison Center immediately and relay label directions about inducing vomiting.

How to Induce Vomiting

Induce vomiting only if the pesticide label and medical professional tell you to and only as a first-aid measure until the victim can get medical attention. Do not spend a lot of time inducing vomiting if it delays getting the victim to a hospital.

Ipecac syrup is no longer recommended for routine use in most poisonings. Clinical studies have demonstrated no benefit from its use. Ipecac works too slowly in inducing vomiting and results in only about one-third of stomach contents being voided.

When NOT to Induce Vomiting

Never induce vomiting if the label warns against it or if the victim:

Sometimes poisoning victims go into shock. If untreated or ignored, the victim can die from shock even if the poisoning itself would not be fatal.

The victim's skin will be pale, moist, cold and clammy. The eyes are vacant and lackluster with dilated pupils. The breathing will be shallow and irregular. The pulse is very weak, rapid, and irregular. The victim may be unconscious or may have fainted.

If a person is in shock, keep the victim:

Antidotes are available only for anticoagulant rodenticides and organophosphate and carbamate insecticides. Antidotes can be extremely dangerous if misused, so they should be prescribed and administered only by a qualified physician. Never use antidotes before handling pesticides in an effort to prevent pesticide poisoning.

A well-equipped first-aid kit which is always readily available can be important in a pesticide emergency. It should have a tight fitting cover with a latch and seal so that it won't come open or allow pesticides to leak inside. Label it clearly with a permanent marker. Keep a first-aid kit wherever you keep or work with pesticides, such as in your work vehicle, near your pesticide storage area, and where you mix and load pesticides into application equipment.

Some items to consider including in a first-aid kit include:

Although not technically a part of a first-aid kit, it's a good idea to have a change of clothes available in case a person's work clothes become contaminated. Note that the Worker Protection Standard (WPS; discussed in more detail in Chapter 14, "Federal Pesticide Laws and Regulations") has specific requirements for decontamination kits for covered employees of agricultural establishments.